fullfact.org | And when they say everything they mean everything…

Trade with the EU matters a lot, but slightly less than it used to

That share was declining until 2013, when exports to other countries increased at a faster rate. Since then the share has held steady.

The EU’s share of the world economy has been declining too. In particular, the developing world has been growing faster than the developed world and is expected to continue doing so.

53% of our imports into the UK came from other countries in the EU in 2016. That proportion has fallen by a few percentage points over the past 16 years. 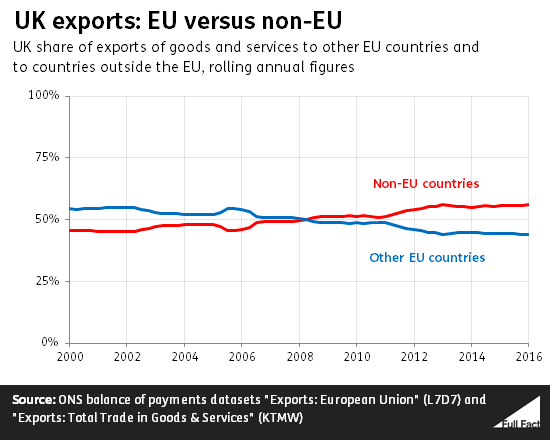 It’s sometimes argued that these statistics overstate the proportion of UK exports that go to the EU, because a lot of goods pass through ports like Rotterdam before being shipped to a final destination outside the EU.

Both the Office for National Statistics and the government’s review of our EU membership have concluded that it’s hard to quantify the extent of this ‘Rotterdam effect’ or establish whether it’s a serious problem for the statistics.

The ONS has estimated that it may account for around 2% of all exported goods and services to the EU.

Trade after we leave

Assuming the UK leaves the EU, the future rules on trade will depend on what kind of agreement, if any, the UK reaches with the EU after its departure. Trade in services will be particularly important, because about 80% of the UK economy comes from providing services.

The future trade rules on services for a country outside the EU are particularly difficult to predict. We’ve got more on this here.

After the UK leaves the EU we will still continue to trade with EU countries. The government wants to negotiate a new trade agreement to make that trade easier.

If no new trade deal is negotiated and trade took place under World Trade Organisation rules, we would have to pay tariffs and face other barriers to trade.

How much is UK-EU trade worth to each party?

There’s lots of different ways to look at how much UK-EU trade is worth to each party, and what that means for who will be most keen to agree on a post-Brexit trade deal .

The three main ways that are used are:

Now for the detail…

The rest of the EU sells about £60 billion more to us in goods and services than we sell to them, according to UK data—so the UK runs a “trade deficit” with the rest of the EU.

Exports of goods and services to other EU countries were worth £230 billion in 2015, while exports from the rest of the EU to the UK were worth about £290 billion.

Those figures differ if you look at EU data, and the Office for National Statistics told us that this is because EU countries collect data about services in different ways.

For example, EU data suggests goods and services exported from the rest of the EU to the UK could have valued up to £350 billion in 2015—higher than the £290 billion the UK data. Either way, the rest of the EU as a whole sells more to us than we sell to it, and that’s the case for the majority of EU countries. 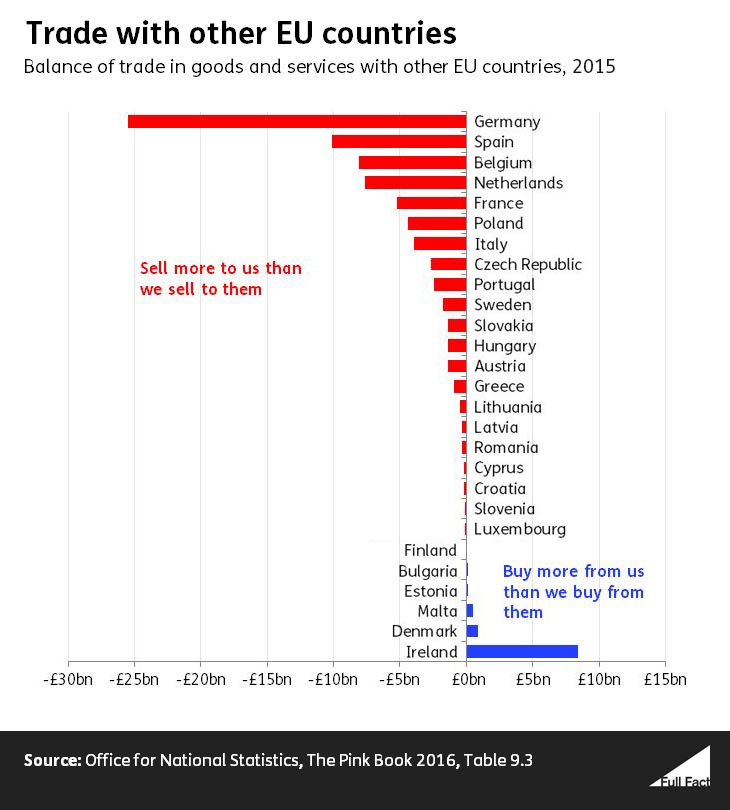 Within that overall picture, there’s a lot of variation in the trade that each individual country does with us. Germany has the biggest trade deficit with us— in 2015 it sold about £25 billion more to us than we sold to it, according to UK data.

You might have heard the claim that only 8% of the EU’s exports go to the UK, compared to the well over 40% of UK exports that go to other EU countries.

Whether the 8% is correct depends on how you treat exports between EU countries. Looked at another way, you can get 17%.

The other way to look at it is to say that what we’re really interested in is how important the UK would be to the EU’s trade with countries outside of the EU only, if it were to leave the EU. Looked at that way, about 17% of the EU’s goods and services exports to non-EU countries went to the UK in 2014, according to EU data. 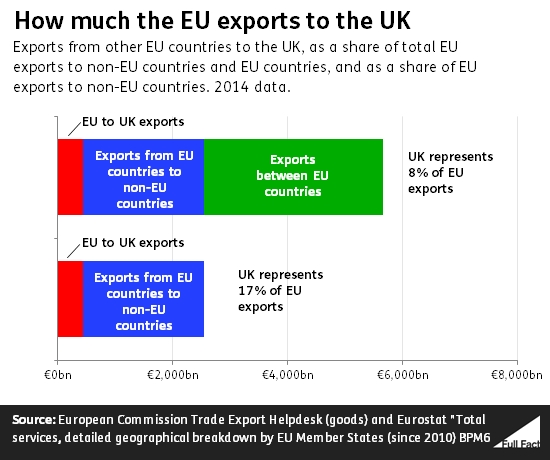 The UK is the EU’s largest single export market for goods, but only just

It’s also often claimed that the UK is the EU’s largest single export market for goods.

That’s just about the case if you treat the UK as if it were not in the EU and focus on EU goods exports to non-EU countries. The UK is very slightly ahead of the USA, with 16.9% of EU exports going to the UK, compared to 16.5% going to the USA in 2015.

If you’re counting EU countries too then Germany receives the largest amount of goods exports from other EU countries. 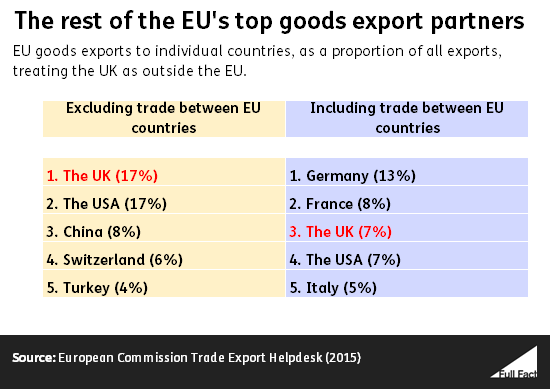 It’s more complicated to work this out for services due to the variation between each country’s data.

Although fewer of our exports are now going to other EU countries, these exports are still just as important to our economy.

The £230 billion exports of goods and services to other EU countries were worth about 12% of the value of the British economy in 2015. It’s been at around 13-15% over the past decade.

Exports from the rest of the EU to the UK were worth about 3-4% of the size of the remaining EU’s economy in 2015. The exact number depends on whether you use the £290 billion figure from UK data, or £350 billion from EU data.

As we’ve mentioned, the figures for trade vary depending on whether you look at UK data or data from other EU countries. If we used all the variations for every time we used a figure, we’re not convinced anyone would make it to the end of the article.

We originally said in the first section of this article that:

“The European Commission itself says that “over the next ten to 15 years, 90% of world demand will be generated outside Europe”.”

While this was quoted from the Commission’s website, it has since been removed.

The Commission told us that this should have read: “90% of global economic growth by 2015 is expected to be generated outside Europe”, from a working document. This was based on IMF forecasts in 2012 for GDP growth worldwide up to 2015.

We’ve replaced this with the paragraph about the EU’s declining share of the world economy.